Esperoct® is an extended half-life (EHL) rFVIII treatment for your patients with hemophilia A.1

with no dose adjustment needed and
related PK testing required1,4,c

ABR=annualized bleed rate; PK=pharmacokinetic; PTP=previously treated patient.
bSteady-state FVIII activity profiles were estimated in 143 patients using a one-compartment model with first-order elimination with PK parameters of clearance and volume of distribution.1
cRegimen can be individually tailored to less or more frequent dosing based on bleeding episodes.1 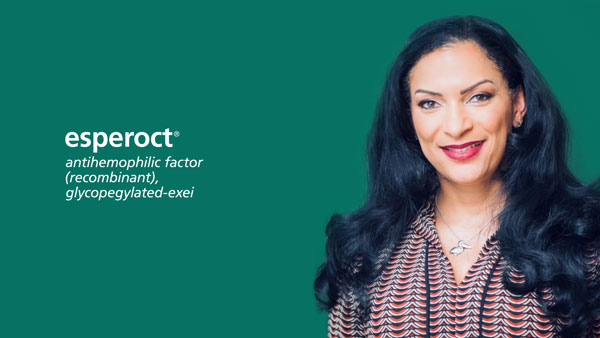 In a phase 3, open-label study, safety, PK, and efficacy of Esperoct® were evaluated in PTPs aged ≥12 years with severe hemophilia A; 175 received routine prophylaxis (50 IU/kg every 4 days) and 12 adults elected to be treated on-demand during the main phase. After the main phase, a subset of patients continued on in extension phase part 1. After 24 weeks, patients from extension phase part 1 continued into the non-randomized extension part 2 until the end of trial. The median annualized bleeding rate shown is from the main and extension phases of the pivotal clinical trial of previously treated people aged ≥12 years with severe hemophilia A who received Esperoct® 50 IU/kg every 4 days, for up to 6.6 years.3,4

Getting your patients started on Esperoct®.

Novo Nordisk is here to help your hemophilia A patients who want to make the switch to Esperoct®. Learn about our trial prescriptiond and product support programs.

See how we can help

Ready when they are.

dPatients who have been prescribed a Novo Nordisk hemophilia and rare bleeding disorder product for an FDA-approved indication, and who have commercial insurance or who are uninsured, may be eligible to receive a limited supply of free product. Patients who participate in any government, state, or federally funded medical or prescription benefit program, including Medicare, Medicaid, Medigap, VA, DOD, and TRICARE, including patients who participate in a managed Medicaid program or have Medicaid as secondary insurance, are not eligible to receive product support. Product is provided at no cost to the patient or the HCP, is not contingent on any product purchase, and the patient and HCP must not: (1) bill any third party for the free product, or (2) resell the free product.

Esperoct® [antihemophilic factor (recombinant), glycopegylated-exei] is indicated for use in adults and children with hemophilia A for on-demand treatment and control of bleeding episodes, perioperative management of bleeding, and routine prophylaxis to reduce the frequency of bleeding episodes