As an adjunct to a reduced calorie diet and increased physical activity for chronic weight management in adults with a BMI of ≥30 kg/m2 (obesity), or ≥27 kg/m2 (overweight) in the presence of a weight-related comorbidity. Click for Limitations of Use.

We appreciate your interest in Wegovy®. To help answer patient questions about supply, click here.

Click here for important news about chronic weight management for your appropriate patients aged 12-17 with obesity.

Dosing designed with your patient in mind1

Start your patients with once-weekly Wegovy® at 0.25 mg and escalate the dose every 4 weeks 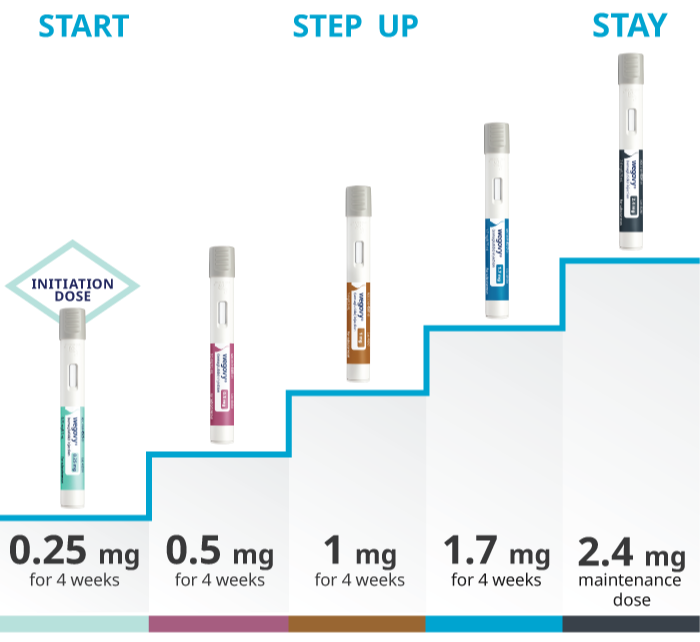 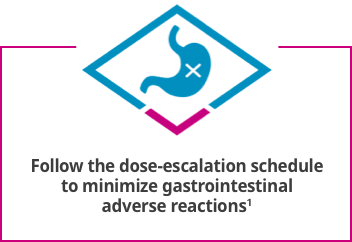 In patients with type 2 diabetes, monitor blood glucose prior to starting Wegovy® and during Wegovy® treatment.1

What to do if patients...

If patients do not tolerate a dose during dose escalation:

If patients do not tolerate the maintenance 2.4 mg dose:

The dose can be temporarily decreased to 1.7 mg once weekly, for a maximum of 4 weeks.
After 4 weeks, increase Wegovy® to the maintenance 2.4 mg dose once weekly.
Discontinue Wegovy® if the patient cannot tolerate the 2.4 mg dose.

Patients miss 1 dose and the next dose is:

>2 days (48 hours): Instruct them to administer Wegovy® as soon as possible.

<2 days (48 hours): Inform them to NOT administer a dose of Wegovy®. Resume dosing on the regularly scheduled day of the week.

Inform them to resume dosing as scheduled. Or if needed, inform them to reinitiate Wegovy® and follow the dose-escalation schedule, which may reduce the occurrence of GI symptoms associated with reinitiation of treatment.

No clinically relevant drug-drug interaction was observed when an oral contraceptive drug was given with semaglutide 1 mg at steady state.1*

Due to a delay in gastric emptying, caution must be exercised when any oral medications are given along with Wegovy®.

Because of the potential for fetal harm, discontinue Wegovy® in people at least 2 months before they plan to become pregnant to account for the long half-life of semaglutide.

*A drug interaction study evaluated the potential impact of semaglutide 1 mg at steady state on the exposure of a co-administered combined oral contraceptive ethinylestradiol/levonorgestrel at steady state.1

The addition of Wegovy® in patients treated with insulin has not been evaluated. When initiating Wegovy®, consider reducing the dose of concomitantly administered insulin secretagogues (such as sulfonylureas) or insulin to reduce the risk of hypoglycemia.1

See a demonstration of how to use the Wegovy® pen 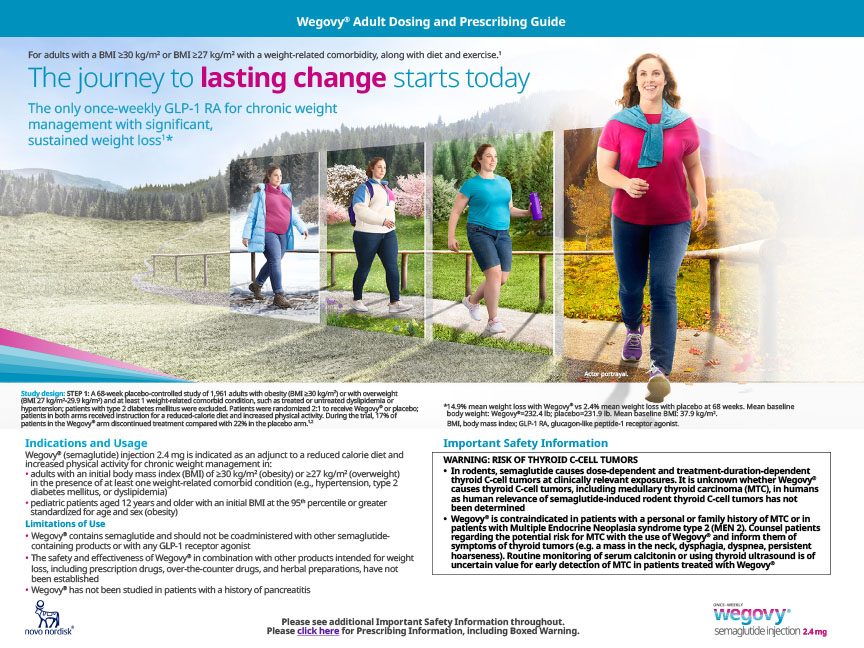 PDF
Share
A link has been copied to your clipboard.

Paste it into your email or chat app to share

Wegovy® (semaglutide) injection 2.4 mg is indicated as an adjunct to a reduced calorie diet and increased physical activity for chronic weight management in adults with an initial body mass index (BMI) of ≥30 kg/m2 (obesity) or ≥27 kg/m2 (overweight) in the presence of at least one weight-related comorbid condition (e.g., hypertension, type 2 diabetes mellitus, or dyslipidemia).

Use in Specific Populations