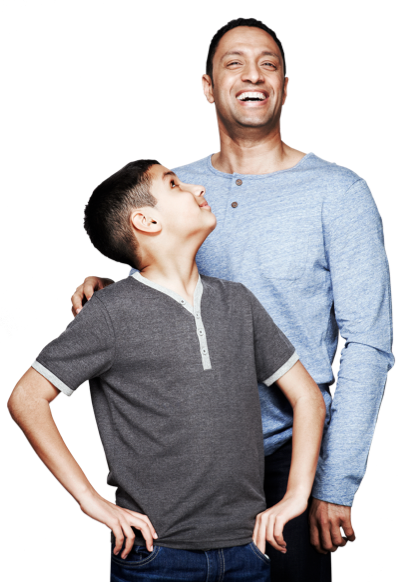 Significantly greater change in standing height from baseline to month 12 and month 24 with 0.05 or 0.1 mg/kg/day vs. 0.025 mg/kg/day in pediatric patients with GHD1 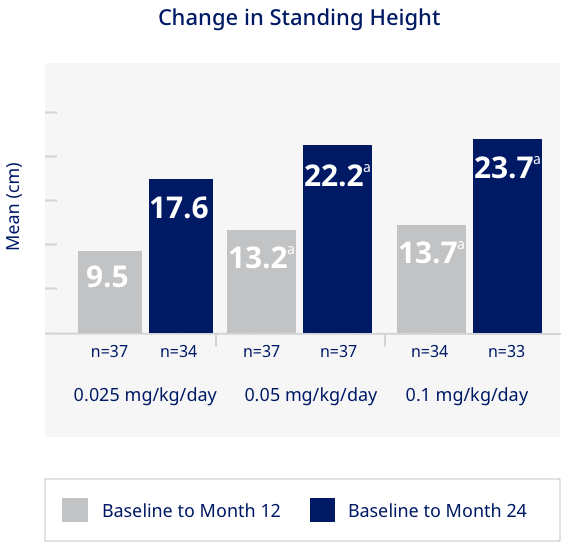 The efficacy and safety of Norditropin® was assessed in a multicenter, prospective randomized, open label, dose response study with three doses (0.025, 0.05 and 0.1 mg/kg/day). A total of 111 pediatric patients with GHD were randomized to each dose; 37(0.025 mg/kg/day):38(0.05 mg/kg/day):36(0.1 mg/kg/day). Patients met the following entry criteria: chronological age ≥ 3 years with a skeletal age < 10 years if male and < 8 years if female; pubertal stage = stage 1; previously untreated GHD; peak plasma hormone concentration < 7 ng/mL or < 10 ng/mL (depending on assay used) in two tests.1 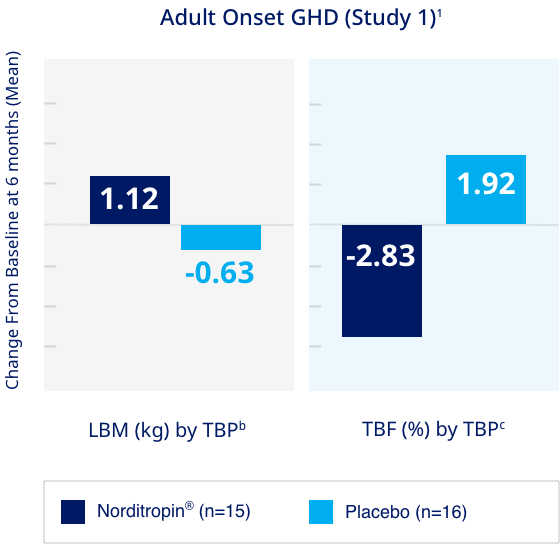 A single center, randomized, double-blind, placebo-controlled, parallel-group, six-month clinical trial was conducted in 31 adults with adult onset GHD comparing the effects of Norditropin® (somatropin) injection and placebo on body composition. Patients in the active treatment arm were treated with Norditropin® 0.017 mg/kg/day (not to exceed 1.33 mg/day). The changes from baseline in LBM and TBF were measured by TBP after 6 months.1 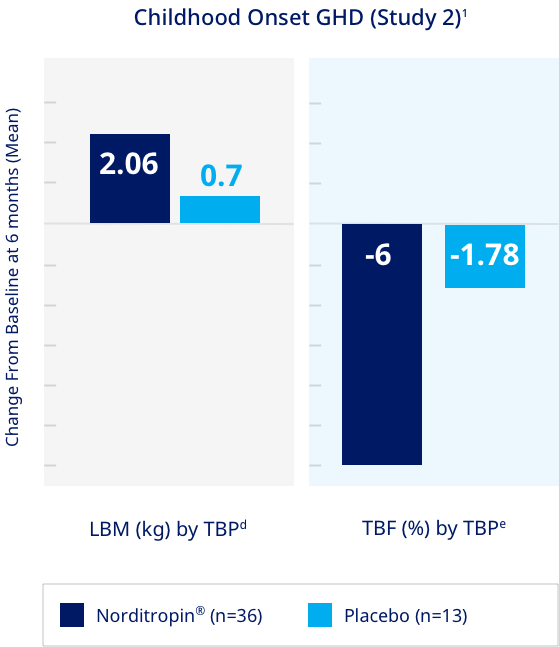 A single center, randomized, double-blind, placebo-controlled, parallel-group, dose-finding, six-month clinical trial was conducted in 49 men with childhood onset GHD comparing the effects of Norditropin® and placebo on body composition. Patients were randomized to placebo or one of three active treatment groups (0.008, 0.016, and 0.024 mg/kg/day). Thirty-three percent of the total dose to which each patient was randomized was administered during weeks 1-4, 67% during weeks 5-8, and 100% for the remainder of the study. The changes from baseline in LBM and percent TBF were measured by TBP after 6 months.1

Looking for data about other growth-related disorders?

How did Norditropin® perform in a real-world-setting?

View safety and efficacy results from an observational study of pediatric patients in the U.S. (ANSWER–originally a post-marketing registry).2,a

aThe ANSWER Program was originally a post-marketing registry of adults and pediatric patients treated with Norditropin® as prescribed by their physician and according to routine clinical practice. Since it did not investigate treatment specifics, it was developed into a non-interventional, observational study that allowed evaluation of the safety and effectiveness of Norditropin® in a real-world setting in the United States.2

Norditropin® FlexPro® pens allow you to personalize your patients’ dosing regimens from childhood through adolescence.1

Norditropin® is contraindicated in patients with:

Norditropin® (somatropin) injection is indicated for the treatment of pediatric patients with:

Norditropin® is contraindicated in patients with:

Use in Specific Populations

Clinical education for your patients